MD: Invent, Invest and Include

Labor Day was designed to honor labor and celebrate by relaxing, but some people were very busy. President Barack Obama , accepted the resignation ( he was fired) of Anthony Van Jones a special adviser for Green jobs at the White House Council for Environmental Quality.

Invent , Invest Include, that was Anthony Van Jones, mantra. Invent new ways of doing things, Invest in it and Include those underprivileged African-Americans and other disadvantaged communities that have been shut out of the job market.

Its been accepted practice, that Government big money contracts are awarded based on cronyism. The administrators of the programs get paid top dollar, the workers get minimum wage, little if any training , and a certificate on recycled paper at the end of the program. Van signaled his intention of insuring that would not happen. That Negro had to go.

You don’t believe me ? Look around at some urban neighborhoods and see if there are traces of the billions of dollars that have poured in and then right back up the expressway. No, Van Jones had to go.

Mr. Jones was in charge of 80 Billion dollars, the creation of 6.8 million jobs according to the Council for Economic Advisors, he had signaled his intention of making sure that money was spent on training and jobs for under privileged people, teaching them to retrofit buildings all across America with solar panels, insulation and other weatherizing materials. Is he gone yet ?

Van Jones resignation, was a big loss to the White House, President Obama, had personally picked him. It is a much bigger lost to the hopes of under/unemployed people. Feel sorry for those people.

Don’t feel sorry for Mr. Anthony Van Jones, he is a made-man in the Democrat Party. The lost of his job, wont get him evicted either, he , his wife and daughter will not be at the local shelter for lunch. He isn’t hurting for money, his salary with the Ella Baker Ctr in 2005 was $60K; over $82K in 2007, jumping to more to than $100,000 as the Environmental Czar and add sales of his book "The Green Collar Economy," number 12 to be exact on the New York Times best sellers list in the book's first week.

Yes, Mr. Jones will be just fine.I know there are some good white folk out there who will help Mr. Jones land on his feet.

Van Jones said things in a group of Black people, things Black people talk about amongst ourselves, things he thought he was saying in a safe ( read Black) environment.

He said " Black kids dont do Columbine type killings. " He’s right, so far, when our kids murder, its personal, the numbers are in the single digits.


Yet another time he said " President Bush was a crack head" While , President Bush was arrested in 1972 for cocaine possession and Bush has essentially admitted that he used cocaine. Van had his terms wrong, Blacks do crack, White people cocaine and for that Van should apologize.

We haven’t seen the last of Mr. Jones. But you can wave bye bye to 80 billion dollars of hope, creation of jobs. The trickle down theory will be trotted out once again.

Van in his own words.


"If the road to social transformation can be paved only by saints who never make mistakes, the road will NEVER be built." -Van Jones 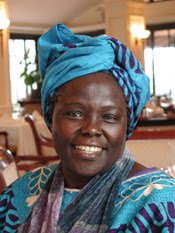 Dr. Wangari Maathai, 2004 Nobel Peace Laureate and Founder of the Green Belt Movement (http://greenbeltmovement.org) [and Founder of the Kenyan Green Party], will be in the US and Canada for her Fall 2009 speaking tour, from September 18th to October 6th!

Shared via AddThis
Posted by Unknown at 5:22 PM No comments:

A 15-year resident of South Minneapolis on the Green Party’s 5th Congressional District steering committee Jeanine Estimé, is seeking to unseat Democratic-Farmer-Labor Party endorsed incumbent, Elizabeth Glidden.
"Our voice — my opinion — will be for the community,” she said during a brief campaign announcement at the Central neighborhood-based Sabathani Community Center.

Estimé said her main campaign issues will be education, health care, civil rights and dealing with the foreclosure crisis, which has hit the 8th Ward hard, adding that she wouldn’t be satisfied until foreclosures are “completely stopped.”
Estimé is an active volunteer for the Boys and Girls Club, Clean Water Action and Powderhorn Youth Farm. She is an immigrant from Haiti who now has U.S. citizenship, a background she said gave her extra motivation to run.
“I think that my citizenship means to do something, to be the voice for people that cannot speak,” she said.

A graduate of Roosevelt High School, Jeanine Estimé has lived in South Minneapolis for over 15 years. She is a single parent, who worked her way through school to receive a B.A. in Liberal Arts from Metropolitan State University. Jeanine Estimé is currently employed as an Education Assistant at her daughter's school.
Please help Jeanine win by donating to her campaign today!
Posted by Unknown at 3:23 PM No comments:

NY: Open Letter to Greens across the country from Robert Gumbs

In line with the issue of the racial problems that the New york Green Party suffers from there is another dimension that needs to be looked at. Whenever, i have brought suggestions for this party to implement here in new york, it's routinely ignored. However, - Karen Young - with the help of a few other people seem to think that they have the right to completely make the New York party into their own image. They hold meetings when they want, they invite who they want to those meetings and everybody stands for it. I try to make a point in a meeting and I am castigated as an arrogant black male, slightly obtuse and definitely unwelcome.

The fact that white men in the New York Green Party asked me to leave the party because of my opinion on certain issues really astounds me. For this to happen in the supposedly democratic Green Party is a tragedy. However, i have had to face up to lynch mobs, made up of my white American comrades in arms in Germany, so this incident will not hold me down one bit. I believe in fighting back.

6 young black men were almost lynched and forced to rot in jail for a crime they didn't commit, the rape of a white woman in central park. There are politicians who are trying to have an investigation as to why this travesty happened. What does the Green Party's Mayoral candidate have to say about this?

Why should urban residents in inner city New York follow a candidate that has not outlined a coherent urban policy?

This is the state of affairs that I believe Greens across the country will say is deplorable. Am I arrogant because as the only black man active in the New York party for the last 5 years i choose to question this state of affairs?

Newcomers have come to New York, with their own agenda, and they think they can twist the party to their tune. Fine - but if you are not going to deal with the issues that concern Black Americans that live in this city, then what the hell good are you for this party?

Does any party that refuses to deal with the just needs of Black Americans deserve to be elected to any public office?

This is why there should be a Black person on this so-called NYC Green Committee. If Ms. Young had taken the time to ask what my objection to their new procedure was, I would have gladly discussed it with her. However, in New York the voice of people of color are ignored in the New York Green Party - unless of course they are a celebrity.

I love Cynthia and Rosa for what they stand for, not as a means to an end.

For those of you that are upset for my opinions - tough, i didn't join this party to be a stooge or yes man. I have a very low tolerance for hypocrisy and when I see it - i point it out. This is a party for Black Men, just as much for anyone else. And I promise by almighty God to fight racism and elitism wherever i see it in this party. Because if we are to guide and criticize the other political parties - we have to make sure that we as Greens are correct.

I would also like to thank the support i have received from fellow Greens not only here in New York, but members from the Green Party Black Caucus and Green party members from other parts of the country.
Posted by Unknown at 2:32 PM 2 comments: