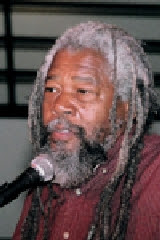 Malik Rahim co-founder of Common Ground Collective in New Orleans
Greens urge far-reaching steps in the US justice system to correct
biases against African Americans, Latinos, and poor people, and
to end record US incarceration rates

WASHINGTON, DC -- Green Party leaders called the US's high percentages of people in prison and racial disparities in incarceration a "shame on America" and urged dramatic steps to reverse the criminalization of large numbers of Americans.

Greens expressed special alarm at recent cases that have revealed systematic racial bias in law enforcement and sentencing, including the prosecution of six black high school students in Jena, Louisiana, for fighting after racial tensions sparked by the display of three nooses in a schoolyard in 2006
• Cancellation of the war on drugs, which Greens have called "a war on youth and people of color"
Posted by Unknown at 6:32 PM No comments: