Ahmad Mitchel-El's visions and reflections on immigration and race: 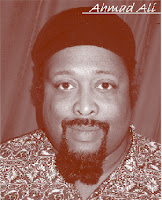 Ahmad Ali Mitchel-El, Green Party member, and write-in candidate for Suffolk County Executive, has released his vision for addressing immigration issues in Suffolk County, New York.
"Both President Bush's guest worker program, and Governor Spitzer's driver's license issue, show more progressive leadership than the current attitude of our county administration," notes Mitchel-El.
Mitchel-El states, "Hiring Centers should be part of an overall plan to make the immigration process work. You don't have to maintain a hostile, illegal status for undocumented people. We can work towards a naturalization process that can really make sense, by registering day laborers, paying them fair wages, and letting them pay taxes, in order to pay for all this."
Ahmad Mitchel-El's reflections on immigration and race:

I find it so hypocritical that the people who control politics and thus government are predominantly descendants of Europeans who did not have to face the racist bureaucracy that Latinos face today. We do not hear complaints about the Canadian border or about Russian and Irish undocumented immigrants--only these Latinos, who can’t seem to physically just assimilate and disappear into the work force.
When is America going to wake up and recognize its own evil history? Here on Long Island, we can’t even allow the Shinnecock the sovereignty over their own land. Can we still be in denial about crimes committed against the native population? As an African American, I believe that we are fools to continue supporting political parties that are only interested in power not progress. How can it be that we still face nooses in 2007?
All of us need to stop and fight the policies of exclusion and preservation of privilege, level the playing field, make it fair for all humans.
When a company sponsors an immigrant, he actually becomes indentured to that company for the term of his process at a rate of pay inferior to his domestic equivalent. He can’t leave to compete for a higher paying job. And, the companies get away with hiring employees off of the street, who are non-union workers, who they can pay less than scale, give no benefits and no fair compensation. Yet, the company is not penalized.

Mitchel-El is a lifelong resident of Suffolk County, a professional musician, and a producer on progressive radio station WBAI 99.5 FM. Mitchel-El is also a peace and justice activist, who has performed at the PeaceSmiths Coffeehouse in Amityville. Mitchel-El's campaign has already received coverage in the media, including: the opinion page of Newsday; "Noticias" newspaper; "Wake Up Call with Jim Krivo" and "In The Moment" on WBAI radio; and "'Tis Treason" on WUSB radio.
The Green Party is an alternative to the Democrats and Republicans. The Green Party has 10 key values, which include "social and economic justice" and "diversity." Greens at the local, state and national level have supported tolerance and justice for undocumented people.

Election day is Tuesday, November 6, 2007. In order to show support for Ahmad Mitchel-El and the Green Party, you may write Mitchel-El's name in the slot at the top of the voting machine. A pencil should be provided, and a poll worker can help direct you. 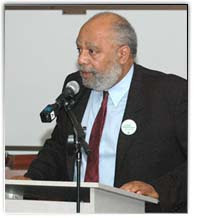 Clifford Thornton of the Green Party of Connecticut has accepted the nomination for the Green Party Steering Committee vacancy. Clifford is a former Green Party candidate for Governor of Connecticut and an active member of the Green Party Black Caucus.
Clifford is the founder of Efficacy, a non-profit organization that has been concentrating efforts on drug policy reform.
Prior to working full-time in drug policy, Mr. Thornton was a middle-level manager with Southern New England Telephone Company in Connecticut. He was in charge of the delivery of all internal telecommunications to the corporation, serving some 10,000 employees with a $50,000,000 annual budget, supervising 23 people. He worked at SNET for 25 years. He was (and is) very active in community projects as well. He served as Vice President of the Greater Hartford Festival of Jazz for three years. This three-day event attracted approximately 75,000 people every year with a mere $50,000 budget. He also served as Parliamentarian of the Greater Hartford African American Alliance and was president of Jazz Radio New England.

NOMINATIONS SHOULD BE SENT TO secretary@gp.org and may also be sent to the national votes list. Self-nominations are allowed.

The voting will be conducted using a ranked choice (IRV) vote with NOTA as an option.
Clifford's maturity and leadership ability would be an asset to the Steering Committee and the Green Party as a whole. Please vote for Cliff and encourage other national delegates to do the same. He will be my first choice.
Posted by Unknown at 3:28 AM No comments: