EFFICACY AND "THE DRUG WAR" 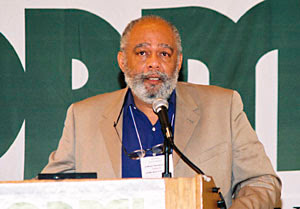 "The inner cities have been in a war for over thirty years. We have spent over a trillion dollars and yet there are more illegal drugs on our streets than ever before. This, I and many others feel is the most important problem we will face in our lives."

Because of this drug war and the collateral damage that ensues, the black and Latino communities are in a devolutionary state. If this is not important to the development of black America, I don't know what is. I also believe that minorities have been singled out while time and time again whites out number black and Latino as to who is selling or using. http://www.hrw.org/reports/2000/usa/

Most people think it is the drugs but in all actuality it is the drug policies. We as a people, as a country have to be thoroughly educated on this issue called the "war on drugs".

"If one does not understand racism, classism, white privilege, terrorism, and the war on drugs--what these terms mean--how these concepts work, then everything else you do understand will only confuse you"


Many see the drug war as being supported by three major phenomena; all of which result in unequal treatment based either directly or indirectly on race, class or white privilege and understand, even though I'm basically talking about America this is how it works all over the world:


1) Greed, Drug markets are a dandy source of 'black' money which ends up being recycled (laundered) through our banks and other financial institutions and then made available for all sorts of scams-- including political contributions which guarantee that politicians remain "tough on drugs." The drug war effectively exempts most well-to-do adolescents from any severe punishment-- while it guarantees that the poor and unconnected are hit the hardest.


In terms of participants, the upper level dealers and financiers are seldom even identified; but the mid and lower level workers (often "minorities") are far more visible and at risk of arrest.


The job security provided to police and the prison industry is also a big motivator. It might be noted here that your state, I believe is going through major prison building and watch who gets the high paying jobs.


The benefits of the war on drugs to the pharmaceutical, Alcohol and Tobacco industries doesn't need to be spelled out. I'm reasonably sure that if cannabis were legal, they would all take a big hit. As it is, illegal cannabis already reduces their sales significantly. Also understand that cannabis is not the real prize, HEMP is. HEMP would immediately revolutionize the clothing, paper, and food industry, a no no in this country.


2) Overt Racism. The malignant racism which justified slavery is definitely not dead. It survived under Jim Crow (segregation) and continues to survive under the drug war. There is abundant evidence that blacks and browns actually have fewer drug problems than whites;; but you'd never know it from our media. As editor past and present of many Drug News Weeklies for years, I had continuous evidence that the war on drugs is incredibly racist in all its applications. That unfairness is accepted by most whites; at least they don't feel any great need to protest.


3) Fear and the intellectual dishonesty that fear promotes in Medicine and the "treatment" disciplines (Psychology and Sociology). This is a very complex issue; but there's no doubt that the drug war survives partly because Medicine has been so thoroughly co-opted. My take is that our whole system of classification of mental "disorders" has also been corrupted by the war on drugs. We literally have no defensible objective standards for the labels we apply (labels demanded by "treatment"). Our "official' take on abnormal behavior also promotes continued marginalization of dissent-- especially by minorities. The truth is that blacks are condemned to the worst schools and if they make any trouble at all, the "solution" is to banish them administratively from the system ASAP. I also see this in New Zealand and all other countries where there is a significant minority population.


America has been a racist society ever since its Constitution was drafted in 1787. We-- as a nation-- have never repudiated our (sainted) founders' embrace of slavery. Until we do, I suspect we'll remain an intensely racist society. Historically, I see it as a smaller-- but far more intense-- version of Western Europe's legacy of exploiting Africa and Asia for profit in the Eighteenth and Nineteenth Centuries. The big difference is that while Europeans were content to travel to those areas and rule as colonizers. Our plantation economy led our forebears to employ the additional barbarity of abduction; along with the destruction of families and of culture and brought about by perpetual enslavement and continued refusal to educate children. The cruel treatment of slaves was justified by a spurious doctrine of racial "supremacy;" but I suspect it was mostly motivated by (the now) seldom-discussed fear of a "servile rebellion."


Our white forebears thus saddled all Americans of color-- especially blacks-- with the bitter legacies of their own guilt and fear. Until that's recognized and repudiated, I see no real improvement. The drug war has been substituted for slavery and segregation and most people can't see it or don't want to see it. I just want to say I am not promoting drug use, I am promoting a sound logical approach to this problem.


I increasingly see ALL human behavior as generated by emotions-- which are then dressed up and justified by "logic." The way you recognize extremists and demagogues is by the shabby quality of their "logic" and the degree to which they are unable to deal honestly with challenges to that logic.

Besides our web site listed below please go to:
http://search.msn.com/pass/results.aspx?srch=105&FORM=MSN8A&q=clifford+wallace+thornton%2c+jr.

"THE DRUG WAR IS MEANT TO BE WAGED NOT WON"

Working to end race and class drug war injustice, Efficacy is a non profit501 (c) 3 organization founded in 1997. Your gifts and donations are taxdeductible

Sistah Anelle Williams, the host of Sisterspace is a "Founding Member" of the GPUS Black Caucus and she was its first "Parlimentarian". This broadcast features commentary from Mumia and a discussion of the African Union's attempt to include the African Diaspora in their organizing campaign.

Posted by Unknown at 9:04 AM No comments: